When I do vSphere and hardware infrastructure health checks very often I meet misconfigured networks usually but not only in blade server environments. That's the reason I've decided to write blog post about this issue. The issue is general and should be considered and checked for any vendor solution but because I'm very familiar with DELL products I'll use DELL blade system and I/O modules to show you deeper specification and configurations.

Blade server chassis typically have switch modules as depicted on figure below. 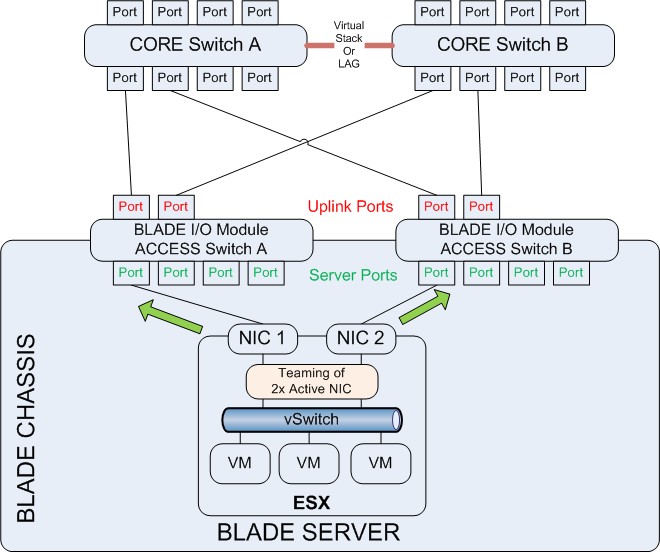 When blade chassis switch modules are connected to another network layer (aggregation or core) than there is possibility of network black hole which I would like to discuss deeply on this post.

Let's assume you will lost single uplink from I/O module A. This situation is depicted below. 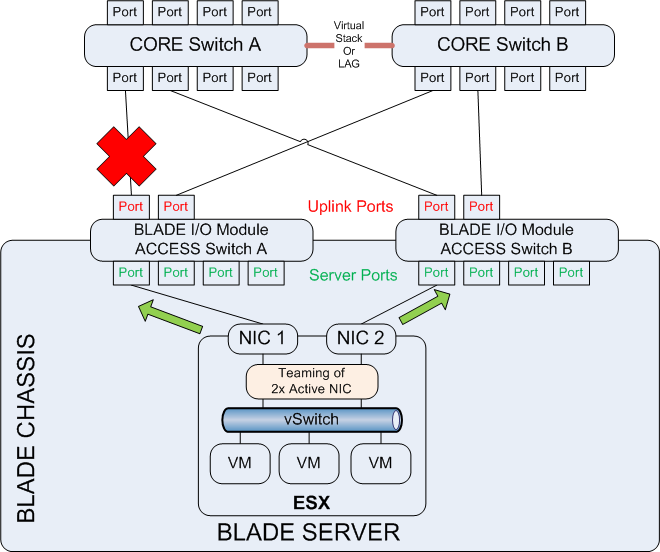 In this situation there is not availability problem because network traffic can flow via second I/O module uplink port. Indeed, there is only half of uplink bandwidth so there is potential throughput degradation and therefore congestion can occur but everything works and it is not availability issue.

But what happen when second I/O switch module uplink port fails? Look at figure below. 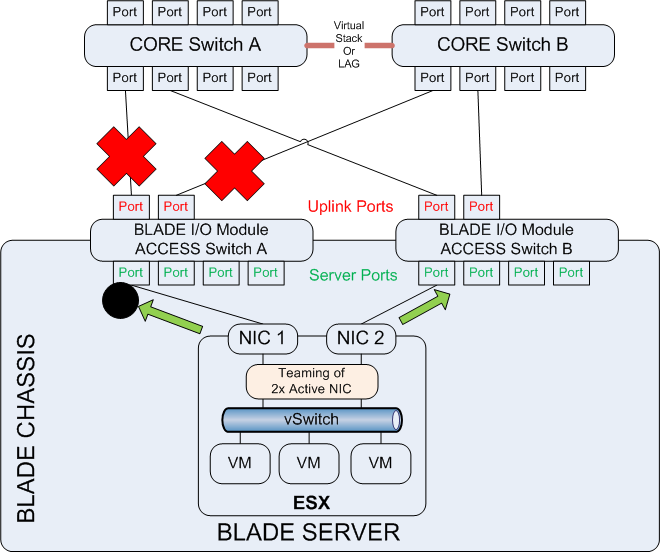 If I/O switch module is in normal switch mode then uplink ports are in link-down state but downlink server ports are in link-up state and therefore ESX host NIC ports are also up and ESX teaming don't know that something is wrong down the path and traffic is sending to both NIC uplinks. We call this situation "black hole" because traffic routed via NIC1 will never reach the destination and your infrastructure is in trouble.

Here are examples of DELL blade switch modules which are switches by default but can be configure to work as I/O Aggregators (aka Simple Switch Mode):
Example of implicit I/O Aggregator is DELL Force10 IOA.

Another I/O Aggregator like option is to use Fabric Extender architecture implemented in DELL Blade System as CISCO Nexus B22. CISCO FEX is little bit different topic but is also help you to effectively avoid our black hole issue.

When you use "simple switch mode"you have limited configuration possibilities. For example you can use the module just for L2 and you cannot use advanced features like access control lists (ACLs). That can be reason you would like to leave I/O module in normal switch mode. But even you have I/O modules in normal switch mode you can configure your switch  to overcome potential "black hole" issue. Here are examples of DELL blade switches and technologies to overcome this issue:
If you leverage any of technology listed above then link states of I/O module switch uplink ports are synchronized to the configured downlink ports and ESX teaming driver can effectively do ESX uplink high availability. Such situation is depicted in figure below. 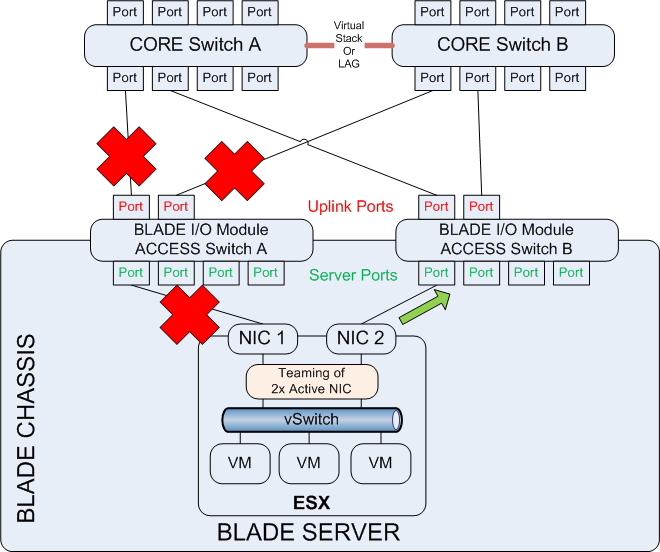 Below are examples of detail CLI configurations of some port tracking technologies described above.


The status of UFD can be displayed by "show configuration" command

How to fix broken VMFS partition?

I had a need of more storage space in my lab. The redundancy was not important so I changed RAID configuration of local disk from RAID 1 to RAID 0. After this change the old VMFS partition left on the disk volume. That was the reason I have seen just half of all disk space when I was trying to create new datastore. Another half was still used by old VMFS partition. You can ssh to ESXi host end check disk partition by partedUtil command.


Old datastore didn't contain any data so I had no problem to try fix command option by following command.


... and then I was able to create datastore on whole disk.

Here are a list of BIOS settings  specifically regarding Dell PowerEdge servers:
Source: http://en.community.dell.com/techcenter/virtualization/w/wiki/dell-vmware-vsphere-performance-best-practices.aspx
Posted by David Pasek at 9:56 AM No comments:

We have observed strange behavior of vMotion during vSphere Design Verification tests after successful vSphere Implementation. By the way that's the reason why Design Verification tests are very important before putting infrastructure into production.But back to the problem. When VM was migrated between ESXi hosts leveraging VMware vMotion we have seen long network lost of VM networking somewhere between 5 and 20 seconds. That's really strange because usually you didn't observe any network lost or maximally lost of single ping from VM perspective.

My first question to implementation team was if  virtual switch option "Notify Switch" is enabled as is documented in vSphere design. The importance of this option is relatively deeply explained for example here and here. The answer from implementation team was positive so problem has to be somewhere else and most probably on physical switches. The main reason of option "Notify Switch" is to quickly update physical switch mac-address-table (aka CAM) and help physical switch to understand on which physical port VM vNIC is connected. So as another potential culprit was intended physical switch. In our case it was  virtual stack of two HP blade modules 6125XLG.

At the end it has been proven by implementation team that HP switch was the culprit. Here is very important HP switch global configuration setting to eliminate this issue.


I didn't find any similar blog post or KB article about this issue so I hope it will be helpful for VMware community.
Posted by David Pasek at 2:36 PM No comments:

The official Dell response to OpenSSL Heartbleed for our entire portfolio of products is listed here.
Posted by David Pasek at 9:21 AM No comments:

I've just found http://codeformatter.blogspot.com/ and I'll try it next time when needed.
Posted by David Pasek at 8:13 AM No comments:

Email ThisBlogThis!Share to TwitterShare to FacebookShare to Pinterest
Labels: blogging

My conceptual answer was ... use PRTG API to monitor alerts and make a phone call when critical alerts exist.

New generation of admins doesn't have problem with APIs but don't know how to dial voice call. That's because they are IP based generation and don't have experience with modems we played extensively back in 80's and 90's ;-)

At the end I promised them to prepare embedded system integrated with PRTG over API and dialing phone configured number in case of critical alerts.