Lab environment:
5x10GB Datastores formed into Datastore Cluster with SDRS enabled.
It is configured to balance based on storage space usage and also I/O load.


You can see configuration details on screenshot below. 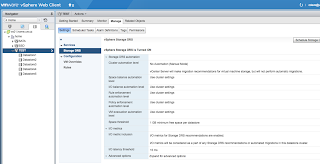 Capacity of one particular 10 GB datastore is depicted below.

In VMFS 5 every datastore gets its own hidden files to save the file-system structure.

Test description: How SDRS defragmentation is efficient when datastore cluster is running out of storage space?

Test Result:
Test Summary: Test passed as expected. Only few details are worth to mention.
Test 4

Test description: Will be new VM provisioned to the datastore with the biggest frees space?

Test screenshots:
Test Result:
Test Summary: Initial placement behaves as expected. New VM is placed to the datastore with less used space. However, we should be aware that this test was done just for single VM provisioning. Multiple VM provisioning can behaves differently because of other SDRS calculation factors (I/O load, capacity usage trend) and also because of particular provisioning workflow and exact timing when SDRS recommendation is called and when datastore space is really consumed for next SDRS recommendations.