How to remove VMFS datastore and reuse local disks for vSAN 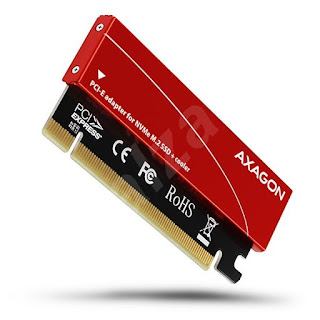 Such hardware upgrade for only $400 would allow me to have vSAN datastore with almost 4 TB raw space because I would have 4-node HYBRID vSAN where each node has 1x NVMe disk as a cache disk and 2x 500 GB SATA disks as capacity disks. The vSAN raw space will be probably 4TB - 10% after disks format but 3.6 TB raw space and 2 TB usable space after decreasing 25% slack space and an additional 25% for RAID 5 protection is still a pretty good deal.

When I tried to remove local datastore (ESX22-Local-SATA-01) it fails with the following error message: 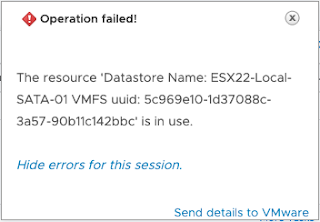 Why is the datastore in use? Well, it can be from several reasons. All these reasons are very well described back in 2014 on Virten blog post "Cannot remove datastore * because file system is busy."

Here is Virten's LUN removal checklist:
The root cause of my issue was the usage of "scratch location". I was blogging about this topic back in 2012 here "Set the Scratch Partition from the vSphere Client".

When you have another datastore available on ESXi host, the solution is very easy. You can simply change "the scratch location". It is much more tricky, in case you do not have any alternative datastore. Fortunately enough, in my home lab, I have three Synology NAS boxes leveraged as shared datastores over NFS and iSCSI, so the fix was quick. If you would need to do it for more then few ESXi hosts, PowerCLI script can be handy.

In case, you do not have any other datastore and you need to remove VMFS datastore you have two options