VMware vSphere Lifecycle Manager (aka vLCM) is one of the very interesting features in vSphere 7.  vLCM is a powerful new approach to simplified consistent lifecycle management for the hypervisor and the full stack of drivers and firmware for the servers powering your data center.

There are only a few server vendors who have implemented firmware management with vLCM.

At the moment of writing this article, these vendors are:

Recently I have got the following question from one of my customers.

"Where I can find official information about certified vLCM server vendors?"

It is a very good question. I would expect such information in VMware Compatibility Guides (VCG), however, there is no such information on "Systems / Servers" VCG but you can find it in "vSAN" VCG. 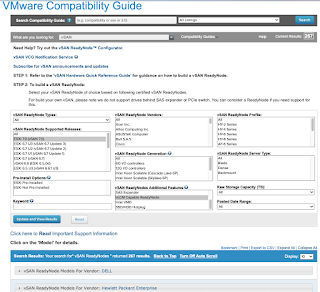 Posted by David Pasek at 9:54 AM No comments:

vSAN 7 Update 1 has been announced, so let's look at what it brings into the table.

In the figure below, you will see what new features are available in this release.

It is a possibility to mount remote vSAN datastore from external (aka Server) vSAN Cluster to multiple Client vSAN Clusters. An example topology is depicted in the figure below.

HCI Mesh allows multiple client vSAN clusters can mount and share a remote datastore from vSAN Server Cluster. A single datastore can be mounted up to a maximum of 64 hosts, including the server cluster's hosts. With such topology, you can do vMotion (Compute only) across multiple vSphere/vSAN Clusters.

With HCI Mesh you can also do a Full Mesh where vSAN Cluster acts as Client and Server of HCI Mesh. Such topology is depicted below, where all three clusters are both clients and servers.

vSAN 7 Update 1 increases overall security with native Inter-node encryption of vSAN data traffic over TCP, which ensures data privacy, authentication, and integrity, leveraging existing FIPS-2 validated crypto module. The interesting fact is, that external Key Management Server (KMS) is not required for this feature. However, please be aware that vSAN Mesh and Data-in-Transit Encryption together are not supported in this release.

vSAN 7 Update 1 has the option to securely erase SSDs for Dell and HPE supported devices at this release, so HPE & Dell vSAN Ready Nodes and DellEMC VxRail should be able to use this feature. Other hardware vendors will obviously come in the future.

Based on VMware internal performance tests, vSAN 7 Update 1 should be approximately 30% faster in comparison to vSAN 6.7 U3, which was the fastest vSAN release so far. I know this is a kind of vague statement without further details but I personally believe, the vSAN performance, especially in the All-Flash model, was already good enough for the majority of traditional workloads. Of course, additional performance improvements are always nice to have but I think there are other factors which are more important at least for customers I work with.

When both features (Dedup & Compress) are turned on, it works in the following way ...

When Deduplication is Turned On, the failure domain is the whole disk group.
In Compression-only mode, the failure domain is reduced to a disk, which is another benefit improving availability, reducing data to resync on failures, therefore improves availability and recoverability SLA.
Compression-only has a significantly higher performance than dedup, that's why OLTP workloads primarily benefit from this feature.
AVAILABILITY AND RECOVERABILITY
Enhanced Durability During Maintenance Operations
First of all, it is important to understand the difference between Durability and Availability. We are talking here about Durability during vSphere/vSAN Cluster node maintenance mode. The feature is nicely depicted in the figure below.
When ESXi host enters Maintenance Mode you can do
Now with vSAN 7 Update 1, you can Ensure Availability, acknowledge that some vSAN objects can become unavailable in case of some other failure, but doing delta writes to other Host or Failure Domain for the vSAN object placed on a host with the only active replica. This results in additional durability protection (prevents loss of data) because, in the case of Replica 1 failure, the vSAN object becomes unavailable, but you can recover the data very quickly from Replica 2 and Delta Writes after the ESXi host returns back from the planned maintenance mode.
Implementation details:
Faster Host Reboots and Cluster Upgrades
MANAGEABILITY
Shared Witness for 2 Node vSAN Deployments
This feature enables 2-Node vSAN deployments to share a common witness instance. vSAN 7 Update 1 supports up to 64 ROBO 2-Node clusters. With vSAN witness consolidation, customers can reduce deployment cost and operational complexity.
Slack Space optimized, operationalized, and renamed into Reserved Capacity
In the past, VMware recommended keeping 25% - 30% capacity as slack space. Now, the new Reserved Capacity is optimized to requires less space and is dependent on deployment variables and decreases with the number of hosts in vSAN Cluster. Example deployment:
Reserved capacity is required for:
On top of disk space optimization for reserve capacity, vSAN now optionally prevents the consumption of vSAN reserved capacity with optional capacity reserves including
Capacity reserves are soft-thresholds that prevent provisioning activities, thus existing VM I/O is not prevented. And once again, this prevention is completely optional, so it is OPT-IN setting and it is not enabled by default. You can see UI in the figure below. 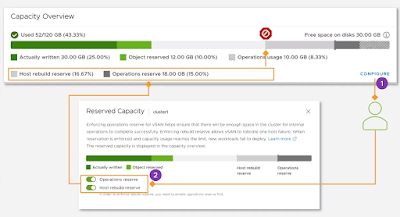 Please note that the vSAN Reserved Capacity feature is not supported on stretched clusters and 2-node vSAN.
vLCM Enhancements
Dell and HPE are supporting vLCM since vSAN 7 release. Now, in vSAN 7 Update 1, Lenovo ReadyNode models are supported as well.
From the technical features point of view, vLCM has been enhanced in the following areas
The technical features above are depicted in the following figure.
Simplified Routing for vSAN Network Topologies
Prior to this release, vSAN topologies with external witness had to use static routing in each ESXi host which was a significant management pain. In vSAN 7 Update 1, alternate default gateway can be specified and static routes do not need to be used. This is a very useful feature from an operational point of view if you ask me.
vSAN I/O Insight
This is another very useful feature, to analyze storage workload I/O patterns. It is
The tool provides solid data points for the infrastructure team to triage issues with app users without the need for complex external tools. See. the screenshot below.
CONCLUSION
vSAN 7.0 U1 release is definitely a significant step forward for VMware software-defined storage, which is an important component of full VMware SDDC stack. And this is a very nice proof of a key SDDC benefit ... Quick response to customers and industry requirements ... This is the reason, why I really like software-defined and hyper-converged infrastructure, leveraging commoditization, integration, and continuous product improvement. vSphere administrator is the king of the house ... at least from the infrastructure point of view :-)
Posted by David Pasek at 9:27 PM No comments:

Yesterday, I have got the following e-mail from one of my blog readers ...

Let me introduce myself, I work in medium size company and we began to sell Dell Networking stuff to go along with VxRail. We do small deployments, not the big stuff with spine/leaf L3 BGP, you name it. For a Customer, I had to implement this solution. Sadly, we are having a bad time with STP as you can see on the design. 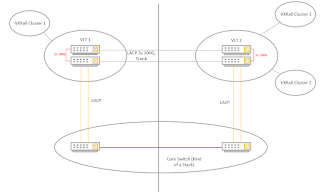 Is there a way to be loop-free ? I thought about Multi Domain VLT LAG but it looks like it is not supported in OS10.

I wonder how you would do this. Is SmartFabric the answer ?

Well, first of all, thanks for the question. If you ask me, it all boils down to specific design factors - use cases, requirements, constraints, assumptions.

So let's write down design factors

Constraints:
Assumptions:
Any unfulfilled assumption is a potential risk. In the case of unfulfilled assumption, the design should be reviewed and potentially redesigned to fulfill the design factors.
Now, let's think about network topology options we have.
The reader has asked if DellEMC SmartFabric can help him. Well, SmartFabric can be the option as it is Leaf-Spine Fabric fully managed by External SmartFabric Orchestrator. Something like Cisco ACI / APIC. SmartFabric uses EVPN, BGP, VXLAN, etc. for multi-rack deployment. I do not know the latest details, but AFAIK, it was not multi-site ready a few months ago. The latest SmartFabric features should be validated with DellEMC. Anyway, SmartFabric can do L2 over L3 if you need stretching L2 over L3 across racks. Eventually, it should be possible to stretch L2 even across sites.
However, because our design is targeted to a small deployment, I think the Leaf-Spine is the overkill for small deployment and I always prefer the KISS (Keep It Simple, Stupid) approach.
So, here are two final options of network topology I would consider and compare.
OPTION 1: Stretched L2 Loop-Free across sites
OPTION 2: L3 across sites with L2/L3 boundary in TOR access switches 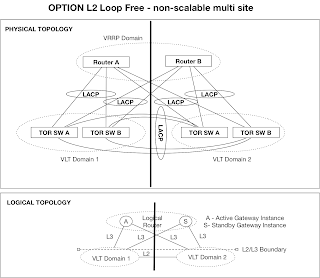 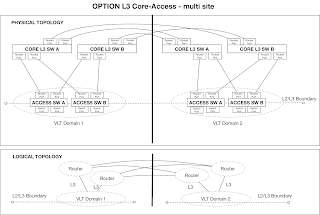 Both considered design options are L2 loop-free topologies and I hope it should fit all design factors defined above. If you do not agree, please write a comment because anybody can make an error in any design or not foresee all situations, until the architecture design is implemented and validated.
If I should make a final design decision, it would depend on two other factors
If I would not have NSX and network operators would prefer Routing High Availability (VRRP) over Dynamic Routing with ECMP (high availability + scalability + performance), I would decide to implement Option 1.
In the case of NSX and willingness to use dynamic routing with ECMP, I would decide to implement Option 2.
The reader in his question mentioned, that his company do not use spine/leaf L3 BGP, therefore Option 1 is probably a better fit for him.
Disclaimer: I had no chance to test and validate any of the design option considered above, therefore, if you have any real experience, please speak out loudly in the comments.
Posted by David Pasek at 1:28 PM No comments:

This is a very short blog post because more and more VMware customers and partners are asking me the same question ...

If you want to know more I would highly recommend reading Frank Denneman's detailed blog posts or books about NUMA, however, the table below is worth 1000 words.

A ~ 40% positive impact on performance is worth to incorporate NUMA considerations in your data center infrastructure design.

If you prefer a comprehensive presentation, Frank Denneman should speak on VMworld 2020 about NUMA in session "60 Minutes of NUMA [HCP2453]".

Posted by David Pasek at 3:17 PM No comments: